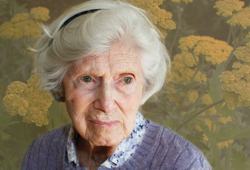 Nature. Companionship. Service. Inspiration came in many forms for the late Doris Walker.

In the heart of the Adirondacks at Saranac Lake, where her family spent summers away from Philadelphia, her love and respect for the natural world took hold. After a few years as a young secretary working for the OSS in Washington, D.C., during World War II, Doris married and settled with her husband in Salisbury. She came to cherish this picturesque setting. There, she grew a sizable garden with fruits, vegetables and flowers for her family.

Later, galvanized by the classic book, "Silent Spring," she began to give time and money to environmental causes. Through six decades, she gardened, became an avid birdwatcher and continued her passion for photography. She passed on to her grandchildren a deep reverence for nature.

Her two happy marriages—first to Theodore "Ted" Pomeroy and, after his early death, to Jeffrey P. Walker—also sustained her.

The son of a Wall Street banker, Ted had grown up amid expectations of following in his father's path, but he had other plans. Like Doris, he loved being out on the land, and took over a family farm in Washington, Conn., before moving to Salisbury. There, he raised mostly black Angus and dairy cattle, as well as chickens. Two of their children, son Ted Pomeroy and daughter Dottie Harris, recall life on the farm as idyllic, with parents who led by quiet example.

Ted remembers his father hiring the two sons of the only African American family in town to help him on the farm during their high school years. "He didn't bother to talk about it," Ted says, "but he demonstrated the idea that all people should be treated with dignity."

So it was with another family in town that was struggling to get by. "He told me they didn't have much money, but that they worked hard and that it was important to respect their efforts," Ted says. His dad made a priority to offer steers to local kids, including this family, on very affordable terms, so that they could compete successfully in 4-H. He felt that anyone with a strong work ethic should be given opportunities.

After Ted died of a heart attack, Doris started life anew with Jeff and his three children. Jeff was outgoing and blessed with many friendships, and he and Doris traveled around the country and the world, often with former classmates.

All along, Doris was active in local life in Salisbury. Dedicated to her church, she saw the parish through seven rectors, each of whom came to count on her steadiness and support. Her love of the town and its people led her to board service for a range of organizations. Later on, Doris and Jeff established a tradition to have each member of the family make a contribution to a charity at Christmas. Jeff would read the list of recipients on Christmas Day.

It was through volunteering that Doris expressed her values most outwardly, while drawing some of the most consequential lessons of her life. She saw firsthand how hard it is to raise a child on your own as a board member at The Housatonic Child Care Center, Dottie notes. Families in crisis served by Salisbury Affordable Housing Commission and Salisbury Family Services motivated her work on those organizations' board and benefited from her time and generosity. Dottie recalls that her mother felt it was important to give people an opportunity to live up to their potential.

In 1987, just two days before Christmas and by then in her 60s, Doris made a final list of her own by establishing one of the first donor advised funds at Berkshire Taconic.

Over the course of the next three decades, she made generous donations from the fund to help her neighbors afford child care, housing and health services. She gave to land and wildlife conservation in the rural corner of Connecticut she called home. And she designated a bequest to the fund so that the organizations and causes she loved will receive annual gifts in perpetuity.

On an early spring morning in 2015, Doris died surrounded by her four children and a few dear friends. The inspiration she had found throughout her long life lives on in her family, who realize the importance of trusting their own instincts in protecting the planet and being grateful for all they have, including the memories of their extraordinary mother.