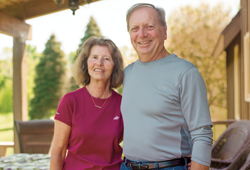 One of the perks of small-town life is the tight-knit sense of community that manifests in gestures of kindness.

When Fran Connors lost her husband in 1993, Jim and Donna Neureuther offered to drive a few extra miles from their Lanesborough home to take the elderly woman to church every week.

Soon, Jim and Donna were going above and beyond good neighborliness. After Fran's best friend died, they picked up her groceries and helped maintain her property and finances, thawing frozen pipes in the early morning and keeping her checkbook balanced. Since Fran had no relatives nearby, they were sure to socialize with her, too, bonding over meals and puzzles. They even brought her on Christmas excursions. Fran was no longer alone—she was part of Jim and Donna's family, thanks to their generosity.

When Fran died in 2009 at the age of 87, she left part of her estate to Jim and Donna. Instead of using the money themselves, they decided to honor Fran and help their community thrive. They opened the Frances and Martin Connors Fund at Berkshire Taconic to provide grants to local organizations, such as the Lanesborough Fireman's Association, the Lanesborough Public Library and Berkshire United Way. "Fran lived here her whole life," Donna said. "Giving back to where she lived just seems right."

Jim and Donna—who have lived in the Berkshires for nearly 45 years and have been married for just as long—also have their own philanthropic goals. They opened a donor advised fund at Berkshire Taconic to focus on their passions, including nature, music and art. Jim noted that Berkshire Taconic "makes it easy" to build your fund and explore your options.

"There's a greater need out there," Jim said. Finishing his sentence, Donna added, "And if you can give, you get a lot out of it, too."