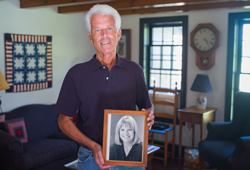 Janet Langlois was worried about her contractor. In the years Dave Cavagnaro had spent restoring the historic North Chatham home Jan shared with her husband, George Vollmuth, he and Jan had formed a powerful bond. Now, he was one among legions of her fans, collected over a lifetime, doing their best to prepare for Jan's death.

"Do you think Dave would make a container for my ashes?" George remembers Jan asking. In this way, she must have reasoned, he could console himself by focusing his talents on a project.

Within a week, Jan died of the same cancer that took her own mother when Jan was 8. Her ashes now occupy a heart-shaped box of Dave's design, where George's remains will one day join them.

Even two years of living with terminal cancer could not suppress Jan's generous instincts. A surpassingly accomplished quilter herself, she persuaded her sister to produce a steady supply of port protectors-detachable pillows that relieve pressure from seatbelts on the tender area where chemo is delivered-for Jan to distribute to fellow patients in treatment rooms.

Twice she shared the stage with her grief counselor in a packed amphitheater, illuminating end-of-life experiences for future doctors at Albany Medical College. She was candid about how her early years-when money was tight and alcoholism roiled family life-served as unexpectedly effective preparation for facing cancer. Those stories were a revelation for students. The letters she received confirmed that.

"She was someone who always believed in reaching out to other people," George says, "because people had been so helpful to her after losing her mother and having some really tough, trying times."

Raised in Massena, N.Y., Jan was one of seven kids in a constellation marked by tragedy: her father lost two wives early. With the St. Lawrence Seaway under construction at the time, engineers and other professionals flocked to this small community on the Canadian border. As a result, the public schools flourished, and at home, education became a fixed star.

A math major, Jan earned scholarship support and worked her way through college at St. Lawrence University, graduating in 1971 with honors (and later serving as a trustee). Accepted into a rigorous credit training program at a New York City bank, she finished first in her class, the only woman among 20 men.

She met George at a Second Avenue bar. Just out of the service and living at home while working as a temp, George was "quite the catch," he notes wryly. "Fortunately for me, there was something there. I got very, very lucky."

They both went on to a high-flying New York careers, George at Time Inc. and Jan at the bank and then as CFO of Ogilvy Public Relations.

All along, Jan tended her wide-ranging friendships with care, reuniting often with high school and college classmates, as well as a group of seven pioneering women in finance who had risen through the ranks together. She also produced over 300 heirloom-quality baby quilts as gifts for friends and co-workers.

On weekends, Jan and George retreated to their cozy Columbia County hamlet. Active from the start, they rallied with like-minded neighbors to fight a highway service plaza and revitalize the library, where a savvy patron later recruited a newly retired Jan as a volunteer.

"The next thing you know, she was on the board of trustees, and then she was the treasurer," George says. Word of her talents-and availability-spread. While Jan went on to perform that same function for the fire district and the cemetery association, she prized the library most.

"It stood for the things she believed in: Education. Literacy. Culture. And a wider vantage point," George says. "It was a place that could introduce you to new worlds." In early 2015, Jan established a legacy fund at Berkshire Taconic to support vital programming at the library in perpetuity.

As her disease progressed, Jan kept an email list of over 200 friends and family updated. Her treatment choices dwindling, the morning came to initiate hospice care. In a final dispatch, she addressed the group with a full heart.

"I feel blessed by all the good I have experienced," she wrote. "I want to return to you with deepest gratitude all the love I have received from you throughout my life." With that, Jan's loved ones got a last chance to say goodbye, before beginning the agonizing work of learning to live without her. Through her generous gift to her beloved library, Jan's legacy lives on.