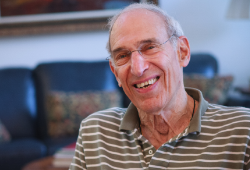 Moe England opened three designated funds at Berkshire Taconic Community Foundation in 2014. With his daughter Elizabeth, he gives annual gifts to the Jewish Federation of the Berkshires and supports scholarships to the Berkshire Music School. Moe and his wife Elise also have a fund for religious education at his synagogue, Temple Anshe Amunim. A successful businessman whose family was among the first to settle in Pittsfield, Moe looks for ways to support his cherished institutions with steady annual income. He shares his story below in his own words.

"My grandfather was one of three brothers that started England Brothers, the department store. After college, my father was involved with a lot of various businesses. He ended up in the liquor business-beer, wine and liquor wholesale. I got involved and did that for about 40 years. If I can immodestly say, we probably started this craft brew trend.

"After traveling pretty much all over the country and a lot of the world for the beer business, when we got to retirement—where else? And it's pretty much why we stay here. The Berkshires are a very unique place.

"I've been involved on the boards of different parts of the cultural community: Berkshire Theatre Festival, the Shaker Village, Berkshire Music School, Shakespeare & Company. At the same time, I've seen Berkshire Taconic gain stature and reputation. They look out for the community.

"So I've been trying to think: how else do you leave an estate? With a bank? The banks change. With a lawyer or an accountant? They die. Berkshire Taconic is one heck of a good operation—to my way of thinking—for what I'm using it for. I feel sufficiently secure they will be here for 100 years and my estate will go for what I want it go for.

"I had been discussing with my brother the Hebrew phrase 'tikkun olam,' or repairing the world—and that's it. That's what I'm trying to do."

Editor's Note: This archival interview celebrates the generosity of Moe England, who died in 2021. We are grateful for his friendship.