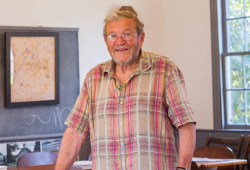 Ralph Fedele opened a legacy fund at Berkshire Taconic Community Foundation to ensure that the Irondale Schoolhouse-now enjoying a second life as Millerton's new visitor center-receives ongoing support after his lifetime. He shares his story below in his own words.

"I've had a 29-year retirement, which is a little unusual, so I've been blessed in that regard. I get involved in practically everything around here. I became the president of the historical society, got involved in Townscape, a local beautification project, and serve on the town board.

"Back in 2008, I was driving up Route 22 and happened to see a building with a tarp on the roof-a lonely, classic, one-room schoolhouse. A study of the village said that one thing needed is a visitor center. So the idea came into my head as I saw the building: What would be better than having a historic building converted into a visitor center?

"We formed a separate 501(c)(3) and a board, and that's what we decided to do. It was a bold project. We could have kept the building on Route 22 and nobody would have ever come to it. By moving it to a high visibility location, we get anywhere from 1,500 to 2,000 visitors per year.

"And it's going to continue in its educational role. We've worked with Webutuck High School on a student art show. We've encouraged students to search out local barns near their homes and photograph, sketch or paint them. They're going to sell their work here. This is an opportunity for kids to learn about history, and also to do something for themselves and their own self-esteem.

"I've done some pretty phenomenal things in my business life, but I have to honestly say that I am proudest of this achievement. We've given this village a little gem, and now people are coming to the schoolhouse and finding new uses for the building. We may even open it up for birthday parties if parents want. Why not? That's what the building's for. It's for the people."