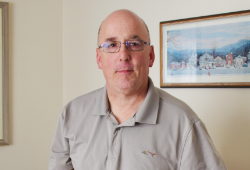 Family means everything to Tom Auge.

Growing up in Pittsfield, his home was always filled with relatives such as his elderly aunt May. After the death of her husband, May was steadily declining physically due to grief and loneliness. Without hesitation, the Auges brought her home and gave her comfort and support. Reinvigorated, she lived with them for almost nine years, surrounded by those she loved.

"Loneliness is difficult for the elderly. That's why there was always family here sharing wisdom, love and knowledge," Tom said while reminiscing in the living room with his father, Bernard, and mother, Eleanor. "I've seen what community and compassion can do. It's transformative."

Tom is also passionate about Pittsfield. He studied philosophy and sociology for a summer at the University of Notre Dame (his father's alma mater) and spent some time in Alabama, but he was always drawn back to the Berkshires. He appreciates that his family has lived here for generations. "I've been all over the world," he said, "but this is where we live."

Driven by the lifelong lessons his parents taught him about giving, Tom established a legacy fund at Berkshire Taconic Community Foundation to bring a sense of strength to Pittsfield's culture and community - especially the elderly. "We've been blessed and we want to give back," he said. "If people give when they can, little drips can turn into a tidal wave."

The Dr. Bernard and Eleanor Auge Family Fund - named in honor of his parents - will provide funding to many of the interests Tom shares with his family. They're enthusiastic about local educational opportunities. Tom holds an associate's degree in criminal justice from Berkshire Community College, and he graduated with two bachelor's degrees in philosophy and sociology from the Massachusetts College of Liberal Arts. Bernard and Eleanor both are members of the Drury High School Class of 1942. In fact, they have been together since they were 14 years old and are celebrating their 75th wedding anniversary in June.

The fund will also support elder services and women's health, and it aims to "stimulate growth" in Pittsfield. Tom is interested in the idea of using microloans to help improve the area.

"I think it's fabulous what he's doing," Bernard said of his son's philanthropy. "People didn't usually think that way during the period I grew up in. I was born in 1923 during the Depression. My parents were so good to me, and they were earning nothing."

Holding back tears, Bernard said Rep. Richard Reuther offered him the opportunity to play baseball in college when he was 15 years old. "That one day changed my whole life. I never expected to go to college," he said. The interaction inspired him to apply for Notre Dame.

"That transformative moment is what we as a family want to do for people," Tom said. "If you show simple random acts of kindness, it changes people's lives."